Why Are Alternate Historians Obsessed with HP Lovecraft?

Happy Halloween! Lets talk about alternate history and HP Lovecraft.
Posted by Mitro at 11:05 AM No comments:

Warping History comes to an end (for now) as we close out the 2010s and look toward the future of alternate history.
Posted by Mitro at 10:57 AM No comments: 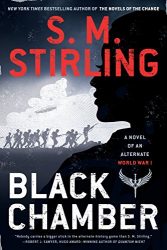 I have a confession to make: I don't like spy thrillers. They are just so...boring. All of the sneaking around, coded talk and lavish parties...yawn. Its why I could never get into Tom Clancy and why I tend to abandon alternate histories that use that type of plot. For me to really enjoy a spy thriller, there has to be something unique about it. So what does today's subject got? Well its written by SM Stirling...good start. And its set in a timeline where Theodore Roosevelt won a third term as president...okay, you hooked me, lets take a look at Black Chamber, book one in Tales from the Black Chamber.

Black Chamber is set in a timeline where William Howard Taft, then President of the United States, dies of a heart attack before he could be nominated again as the Republican presidential candidate in the 1912 election. With Taft gone, the Republicans have no choice but to nominate Theodore Roosevelt, former American president who in our timeline ran under the Progressive Party in 1912 after he failed to secure the Republican nomination. In this timeline, however, Roosevelt gets the nomination, defeats Woodrow Wilson, changes the name of the Republicans to the Progressive Republicans and sets about driving America out of its 19th century attitudes as soon as possible.

Fast forward to 1916 and President Roosevelt's reforms have revolutionized the country. New possibilities have been opened for women and POCs, while industrial and technological development is encouraged by the federal government, which sits on any robber barons or traditionalists who might try to stymie change. Mexico has also been invaded in response to a raid by Pancho Villa and is now a protectorate of the United States, which has to deal with an insurgency against their rule there. Meanwhile, the Great War rages in Europe, but Germany is doing a tad better than they did in our timeline, having managed to capture Verdun. Nevertheless, their unrestricted submarine warfare has angered President Roosevelt and it is only a matter of when America will enter the war on the side of the Entente.

As preparation for this, our hero, Luz O'Malley Aróstegui, is tasked with a secret mission that will take her to the heart of Germany. Posing as a Mexican insurgent willing to help the Germans fight America, she meets with a German agent who takes her to the middle of Saxony where she witnesses a weapons test that can finally break the stalemate on the Western Front...and make America think twice before challenging the coming Pax Germanica.

Black Chamber was an enjoyable read...but it had issues. Admittedly I found the setting to be fascinating. Theodore Roosevelt ranks in my top 5 favorite American presidents and seeing what he might have done had he won his third term made for an interesting thought experiment. I especially liked how Roosevelt worked hard to chip away at the laws that kept women and POCs down, which is an optimistic take on the early 20th century that was refreshing to read. Furthermore, I never felt bored during the less action packed scenes of the novel, which is a plus when it comes to the spy genre and me.

That said, a lot of Stirling cliches tropes appear throughout the book. Airships, of course, make an appearance, which is something Stirling appears to love writing about so much he even included them in his book where there was human life on Venus. Luz, thought a likable character, is your standard bad-ass, non-heterosexual female character that Stirling loves to write about. Granted there is nothing wrong with that, especially when SF in general still tends to downplay anyone who isn't a straight, white person with an easy to pronounce name, but that doesn't mean I haven't seen this character before in Stirling's work.

Also I found the idea that Mexico could be subjugated so easily in just a couple of years to be a little hard to believe. The insurgency is described as almost dead by the start of Black Chamber, which is surprising considering the Philippines put up more of a fight in our timeline when the United States tried to incorporate them.

That all being said, Black Chamber is still a good book in my opinion and I am interested in seeing where Stirling is taking the story. Not to spoil anything, but Stirling seems to be trying to take the geopolitical situation of 1940s Europe and transplant it a couple decades ahead of schedule. Granted the Kaiser's Germany is not Nazi Germany, but there are a lot of hints through the book that we are going to see World War II fought with the personalities and weapons of an earlier generation...and that could be cool to read about.
Posted by Mitro at 3:00 PM 4 comments:

The Warrior and the Saint 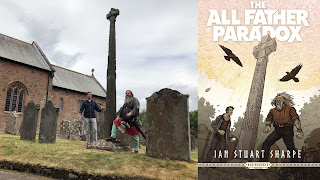 There is something otherworldly about an old Norman church. A sanctity, certainly; the trappings of Christian worship both exude and compel hushed reverence. A sense of community perhaps, as the Anglican Communion struggles to fill the gaps left by austerity, providing food banks now alongside village fetes and raffles. But there is always something beyond that; something in the very fabric of the building, buried deep in the centuries old stone. The best of those churches are keepers of ancient tales, conduits that speak of England’s green hills and forests and what lies beneath.

I was married in one such church, parts of which date from the 12th century, set on falling ground to the west of my home town. The churchyard contains St Withburga's Well, supplied by a spring that is said to have issued forth from the burial place of Withburga, who laid the foundation of a church and convent there, the first Christian settlement in the area in the year 654. She lived and died in an era of unprecedented change. Her father was Anna, King of the East Angles, pagans who came to the British Isles with iron and fire, who believed the green church of the woods heard their prayers more clearly than any monument of stone.

But it is stone that has proved the most enduring store of the pagan story.

At the north side of Gosforth village on Wasdale Road, Cumbria, stands the ancient parish church of St Mary and, in the churchyard the equally ancient and famous Gosforth Cross. This magnificent cross has stood on the same spot for over a thousand years. The monument is a very tall, slender cross made from red sandstone, richly decorated with some very exquisite carvings of Norse gods, Christian symbolism and mythical beasts. It is at the heart of the All FatherParadox and takes pride of place on the cover. I chose this cross as my central motif for the novel because, like Withburga’s well, it has been witnessed to endless change. We can only imagine who built it and why, or what manner of men have toiled in its shadow over the course of that millennium. There was nothing like going there this summer and feeling the power of the landscape myself.

Christianity was in the north-west of England long before of course. Roman soldiers had spread the faith, and left traces when their armies were withdrawn. Wandering saints and preachers came up the Irish Sea from Rome, such as the man later venerated as St. Patrick or Bega of St. Bees, bringing their religion to the Anglo-Saxons who settled there. There is no definitive proof of a church in Gosforth before the Viking Age, but it would have been Celtic, made of wattle and daub, and it too, would have been focused around the local holy spring.

The Vikings swept through Britain with series of invasions throughout the 10th century, and for a time controlled the area of northern England known as Danelaw. Names of towns, roads, and families still in existence today attest to this Scandinavian stronghold. But, like the Angles before them, it seems as though the conquerors were quickly conquered by the customs and beliefs prevalent in their new land. The Gosforth Cross speaks to this unique juncture in time, a world halfway between the pagan and the Christian.

It was first identified in 1886 by the amateur antiquarian Charles Arundel Parker. His findings were a sensation in an age obsessed with Vikings (Wagner's Ring debuted just ten years before), the Victoria and Albert Museum quickly had a replica made. Parker demonstrated that the cross showed scenes described in Norse myth, such as Loki bound, the god Víðarr tearing the jaws of Fenrir, and Thor's failed attempt to catch Jörmungandr, the Midgard Serpent. 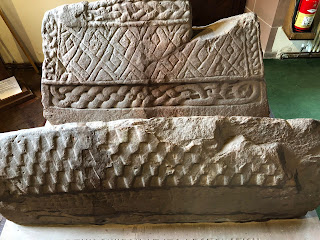 Inside St. Mary’s church are two hogback tombs, another example of this unique fusion of Viking paganism and Anglo-Saxon Christian cultures. About four to five feet long and shaped generally like a bowed house, the hogback derives its name from the convex curve of its roof. Narrative scenes on their sides also depict scenes from Norse mythology and Christian iconography. They are assumed to be tombstones or gravemarkers, and once they too probably stood in the churchyard. But over time, their original use forgotten, their pagan overtones became uncouth. When the church was rebuilt in the 12th century, they were used in the foundations – and only rediscovered in the 1896 rebuilding. At one time, there were other crosses standing in the churchyard as well - some of the fragments remain, also built into the church wall, but most of the structures are lost.

But, what if the experts have got it wrong? What if the depicted duality was something they made up, or misidentified?  What if the gravemarkers and crosses had a different purpose, also broken up and buried with the ages? Or, what if the tipping point toward Christianity changed? What would 1,000 years of history look like then?

I was fascinated by one of the key figures represented on the cross, thought to be the god Heimdall. Heimdall is the sentry of Asgard and a member of the Aesir, the gods of the Norse pantheon. He is the herald of Ragnarök, fated to sound his majestic trumpet, Gjallarhorn, and leading the Aesir into their final battle.

In an entangled world of the Vikingverse, St. Mary’s is home to Churchwarden Michaels, himself a guardian of sorts. But it soon becomes difficult for him to tell Christian from Norse, friend from foe. It is often said that X marks the spot, but exactly what is underneath?
Posted by Mitro at 11:00 AM No comments:

What If Belgium Got Its Empire?

No one expected Belgium to conquer the world...but they sure did try.
Posted by Mitro at 10:55 AM No comments: