Book Review: Another Girl, Another Planet by Lou Antonelli 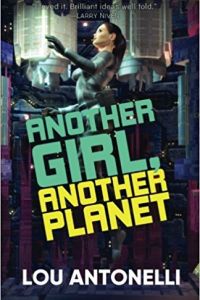 I'm back to doing reviews on Amazing Stories and I begin my return with a look at Another Girl, Another Planet by Lou Antonelli.
Posted by Mitro at 5:30 PM No comments:

Some of you who follow me on Facebook and Twitter may have noticed I have been quiet as of late. Well don't worry, I'm still alive (my newest video should prove as much), but I have been...distracted.

First, as many of you may know Alana is pregnant and her due date is July 24. In case you don't know your calendar that well, that is not that long off, so I have been spending a lot of time preparing the house for our new arrival. Mind you, I'm not complaining, but it does cut into my free time.

You want to know what else cuts into my free time? My day job. Yes, sadly being an alternate historian isn't as lucrative career as some might imagine, so I need to work the 9 to 5 like everyone else. My particular job has also been busier as of late, which means I'm working later, coming home later, working to prepare the home for the baby later...I hope you see where I am getting with this.

So yeah, my usual on the hour social media posts about alternate history are on a temporary hiatus until I finish some major projects and/or work calms down a bit. It sucks, but I still want time to prepare and record videos (which includes also preparing my new "set"). That said, I have seriously been considering moving to a video once every two weeks schedule because I think I need to be realistic about how much free time I am going to have in the coming months.

So a little disappointing, but I am hoping the extra time will mean I can spend more time getting videos right. I may even try doing some live streams here and there like my buddy Tristan does at Step Back History. I had a lot of fun the last time I was the guest for one of those and some people have suggested they would approve of me doing the same on my channel.

So in conclusion, please bear with me while I figure out my life. Videos are still on the way, they just might not come out as regularly scheduled.
Posted by Mitro at 9:52 AM No comments:

Even alternate histories can have a close encounters of the third kind. These are my personal favorite alien races of alternate history.
Posted by Mitro at 12:21 PM No comments:

Step Back History's Subscriber Appreciation Day May 2017 (with special guest...ME!)

In case you missed it, I was the guest for Tristan of Step Back History's Subscriber Appreciation Day May 2017 live stream. You can listen to everything we talked about like alternate history and how screwed up the DC cinematic universe is.
Posted by Mitro at 11:38 AM No comments:

What if Andrew Jackson Stopped the American Civil War?

Donald Trump thinks Andrew Jackson could have stopped the American Civil War...but could he?
Posted by Mitro at 12:07 PM No comments:

Review: What If? Infinity: Guardians of the Galaxy

Did you know Marvel published an alternate history featuring the Guardians of the Galaxy? They did and I reviewed it.
Posted by Mitro at 11:25 AM No comments: