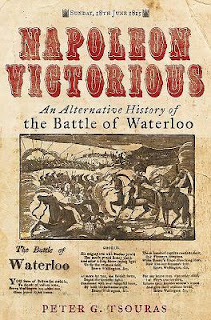 Do you ever read an alternate history book and wish you knew more about the actual history the book is referencing? That is how I felt reading Napoleon Victorious by Peter G. Tsouras.

Tsouras has made a name for himself in alternate history by writing what ifs on various battles and wars and how they went a different way and Napoleon Victorious is no exception. In this alternate history, Napoleon Bonaparte escapes his imprisonment from Elba, but he makes some better decisions on the road to Waterloo and that, coupled with many other changes to history, allows Napoleon to defeat Wellington's army, make peace with the Seventh Coalition and ensure that his empire lives on.

And no it's not a spoiler to say that is what happens. I mean what do you expect from a book called Napoleon Victorious? This is a story where the journey is definitely more important than the destination (although I won't spoil the post-battle epilogue, which ends in a delightful bit of historical irony) and we are with Napoleon every step of the way in this alternate Hundred Days. We see him rebuild his armies, gather his Marshals, obtain intelligence, reform the French government, make secret deals with dissatisfied Saxons, use aerial reconnaissance and outmaneuver the British and Prussians before the final moves at what is called in this alternate timeline: the Battle of Mont St Jean.

Remember kids: only winners get to name the battles. Thus it's Mont St Jean, not Waterloo, in this alternate timeline.

The book itself is written like a fake history book (i.e. For Want of a Nail), complete with real and fictional sources (including some from the author's doppelganger, so it's good to know Tsouras gets work as a historian in other timelines). From my point of view it is a well-researched and written novel. Unfortunately, as I mentioned already, I can't comment on how plausible the scenario is because I don't know enough about the Napoleonic wars to say anything with any real certainty. I certainly have a general understanding of the era, but only in its broadest strokes.

Nevertheless, Napoleon Victorious did what any good alternate history does: it made me want to learn more about what I don't know. I really want to pick up a history book about Napoleon and if any readers of this review have any recommendations, please share them in the comments. Plus Napoleon Victorious still did enough hand-holding (and provided some very helpful maps) that I didn't feel completely lost even if I didn't always know why so-and-so general was important.

Honestly there is not much bad I can say about Napoleon Victorious. The only thing that comes to mind is that because of the number of things that went better for Napoleon in this alternate timeline some alternate historians may find Tsouras' scenario to be implausible from a technical point of view, but truth be told that didn't bother me.

If you love reading history so much that you even enjoy fake history books, then I can heartily recommend Napoleon Victorious.
Posted by Mitro at 10:01 AM 1 comment:

What If the British Won the Battle of New Orleans?

Can a change in the outcome of a battle that happened after a war was over alter the course of history? Let's find out...
Posted by Mitro at 10:07 AM No comments:

Email ThisBlogThis!Share to TwitterShare to FacebookShare to Pinterest
Labels: Andrew Jackson, Battle of New Orleans, Federalists, War of 1812, What ifs 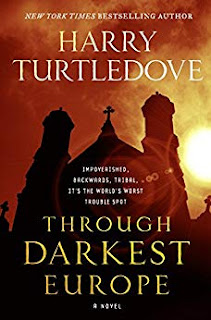 I've been a fan of Harry Turtledove since the beginning of my dive into alternate history. Now while I recognize that many of his long running series are some of the best in the genre, I personally enjoy his stand-alone novels more. Its hard to explain why exactly, I just feel like the author can really tell an interesting and emotional story when he limits himself to a single novel. Great examples, in my humble opinion, include Ruled Britannia, In the Presence of Mine Enemies and Joe Steele.

So, of course, when I heard about Through Darkest Europe, I wanted to read it as soon as possible. It is set in a timeline where the philosophical underpinnings of the Christian and Muslim worlds are reversed. Thus in this alternate history, Islamic theologian al-Ghazali advocates for a more rationalist Islamic religion that promotes learning and science. This causes the Muslim nations of the Middle East and North Africa to be the center of the developed world, the drive behind all modern technology and the ones who explored/colonized the planet. Meanwhile, St. Thomas Aquinas promotes Christian fundamentalism, which means that over time Western Europe falls behind the rest of the world and Christianity remains mostly isolated to a single continent.

The plot itself involves two investigators from the Maghreb (which appears to be a powerful state located in North Africa), a Muslim named Khalid al-Zarzisi and his Jewish partner Dawud, being sent to the Grand Duchy of Italy (minus Sicily). They are there to help the Italians deal with the Aquinists, a fundamentalist Christian sect that preaches a new "Crusade" against the godless Muslims and all of their modern trappings, like tolerance of other religions and feminism. As you can expect, it hits the fan fairly quickly and Khalid and company now have to figure out how to stop an all out religious war from spreading across the world.

Through Darkest Europe reminded me a lot of Matt Ruff's Mirage, which I didn't read, but I did read about the setting. In that book it was North America that was the stand in for the Middle East, while in Turtledove's book its Europe. Frankly, I find Turtledove's switch to be more plausible and to be fair he did do a good job with the world-building, even if there was some parallelisms (we even got a Hitler analog because alternate history). Nevertheless, the cultural changes this Muslim majority world instituted (from the style of business dress to polo being the world's most popular sporting event) were fun and believable.

Honestly the part of the story I had trouble with the most were our heroes. I just found them to be passive observers at best who were only there to tell the reader what was happening at the time. They mostly just reacted to what was happening around them and the "advice" they gave to the Italians about how to deal with their terrorist problem was often of the "well duh" variety. They were still likable characters and I did care what happened to them, I just wish they did more to drive the plot forward.

So yeah Through Darkest Europe wasn't one of Turtledove's best, but it wasn't the worst either. If you are a big Turtledove fan, then I recommend you check it out. If not, maybe check some of the other Turtledove novels I mentioned before reading this one.
Posted by Mitro at 12:30 PM No comments: