What If Pope Alexander VI Had Lived Longer?

Pope Alexander VI (aka Rodrigo Borgia) had big plans for the House of Borgia before he died unexpectedly...but what if he had lived a few years more?
Posted by Mitro at 11:02 AM No comments: 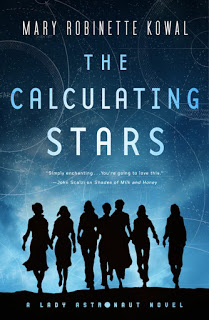 The Calculating Stars by Mary Robinette Kowal, the first full-length novel in The Lady Astronaut series, is being praised as not just as a great alternate history, but as a great science fiction story. I've seen dozens of reviews recommending this one to alternate historians and general science fiction fans alike. But does it deser...you know what, I'm not even going to finished writing that rhetorical question. Yes, it certainly deserves the praise and you should go read it.

But I still need to write a review of it and while much of what I've said has probably been said by others before, I still feel to desire to talk about this book.

The Calculating Stars is set in an alternate history where the American space program gets a boost from two different points of divergence (PODs). The first one is that Thomas Dewey actually defeats Harry Truman in 1948 US presidential election. Under President Dewey, the National Advisory Committee for Aeronautics (the predecessor to NASA in our timeline) is given a bunch of funding to beat the Soviets into putting a satellite into orbit, which they do.

The second point of divergence is that a meteorite crashes in the ocean not far from Washington, DC. This not only wipes out the city, but devastates much of the American East Coast and causes a nuclear winter to begin. Now I am initially skeptical of any alternate history that has to rely on more than one point of divergence, but apparently there is a short story called "We Interrupt This Broadcast" that links the two PODs. Having not read the story yet I can't confirm if this is true, but I'll give the author the benefit of the doubt for now.

Our protagonist, Elma York (a Jewish-American former WASP pilot and mathematician) is the first to discover that the amount of water vapor thrown into the air by the meteorite will cause temperatures to rise over the years, eventually making the planet unlivable. This spurs a multinational effort to colonize space to save humanity. Elma joins the effort as a computer for the International Aerospace Coalition (IAC), but what she really wants to be is an astronaut. For as we all know, you can't really have a colony without women, otherwise where are the babies going to come from?

Despite this biological requirement, Elma and other female pilots wanting to be astronauts find themselves blocked by the sexist 1950s society, but Elma is determined to get into space. Unfortunately this propels Elma into the media's spotlight as "The Lady Astronaut" and her own anxiety about being in the public eye may bring her down before the patriarchy can.

The Calculating Stars was an enjoyable, character-driven story from start to finish. I've always enjoyed alternate Space Race timelines and the novel delivered everything I could want such as cool rocket technology and ambitious dreams to colonize the Solar System. The world-building was good as well, especially with the brief news snippets that showed what was going on across the rest of the world (for example, the Soviet Union didn't weather the extended winter all that well, but China did and is trying to play catch up with the IAC, since the remaining communist bloc is not a part of the IAC).

I also liked how Kowal essentially took our current debate on global warming and transported it to the 1950s, but still managed to make it plausible, even with the conspiracy theorists who don't believe the Earth will warm up enough to make it uninhabitable. Because even with the fate of humanity at stake, if it effects someone's wallet, then it can't possibly be that big of a threat, am I right?

I also liked the character of Elma York. She is a good balance between the common cliche female characters. She is far from a "damsel in distress", being a trained pilot and skilled mathematician who can easily out-fly and out-think many of the boys, but she isn't a simple "strong female character" and has real flaws. For example, even though she is perhaps more progressive when it comes to race then a lot of characters, she still fails to realize at times how privileged she is as a white woman. Her biggest flaw, however, is her social anxiety. As someone who has his own social anxiety issues, I thought Kowal did a great job at presenting this in a realistic way.

Is there anything I didn't like about The Calculating Stars? Well this might be nitpicky, but I thought Elma's husband and chief engineer of the IAC, Nathaniel York, was a little too perfect. He always had the right thing to say (or knew when to just shut up and listen), was always supportive of Elma's dreams and was very attractive for someone who spent a lot of time behind a desk. That all said, I didn't find the character to be offensively bad and he was still likable, but it would have been nice to see some more obvious flaws. Nevertheless, it doesn't really ruin the story in the slightest and I only included it here because I wanted to balance out the review.

So yeah if you haven't read The Calculating Stars then you are missing out. I personally plan to pick up a copy of the sequel, The Fated Sky, as soon as I can. Hopefully Kowal continues to write more in this universe as we need more stories about humanity reach for stars rather than the current timeline we live in where we do nothing but squabble in the mud.
Posted by Mitro at 9:59 AM No comments: